Its easy, convenient and fast

Posted by Ohwofosirai Desmond on Nov 20, 2019 at 10:45am under category Other News & Events with 5 Comments 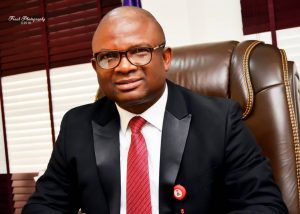 When the great British playwright, William Shakespeare, uttered the statement that some men are born great, some have greatness thrust upon them, while some have achieved greatness through dint of hard work, one would never have imagined that centuries afterwards, the  statement would still hold true in the far away continent of Africa, specifically, South-West Nigeria. The statement of the British playwright has been found true in the case of Ebenezer Adekunle Ajayi. Adekunle Ajayi was born on 2nd February, 1974 into the family of Late High Chief J. B. Ajayi & Mrs. L. A. Ajayi of the Royal Family in Igogo-Ekiti, Moba Local Government Area, Ekiti State. Thus, he was born great. He commenced his primary school education at Emmanuel Anglican Primary, Igogo-Ekiti in 1980 and obtained his Primary Six Leaving Certificate in 1985. His secondary school education started at the Commercial High School, Igogo-Ekiti where he obtained his Junior Secondary Certificate in 1988. He proceeded to the Unity Secondary School (now Government College), Usi-Ekiti and obtained his Senior Secondary School Certificate in 1991. He initially secured admission to study Physiology at the University of Ilorin but was automatically converted to study Medicine and Surgery a year later at the same University because of his brilliant academic records. He obtained his Bachelor of Medicine and Surgery in record time in 1998.

He began his medical career as a House Officer between 1999 and 2000 at the Federal Medical Centre, Owo, Ondo State, and proceeded to Ekiti Anglican Diocese Hospital (Ile Abiye Hospital) in Ado-Ekiti as a Senior House Officer in the year 2000. He forged ahead to observe his one year compulsory Youth Service to the nation between 2000 and 2001 at Ajaokuta Steel Company Limited in Kogi State as a corps member. He was retained by the company as a Medical Officer due to his brilliance, hard work and dedication to duty after the completion of his youth service in 2001 and he diligently served in that capacity till 2003.

In 2003, in furtherance of his career, he moved to Obafemi Awolowo University Teaching Hospital Complex, Ile-Ife (OAUTHC) to commence his residency training programme in Internal Medicine. In 2005, he passed the examinations to become a Senior Registrar in the same hospital and in the year 2007, he was qualified as a Fellow of the West African College of Physicians (WACP) in record time.

He proceeded to the then Federal Medical Centre, Ido-Ekiti, (now Federal Teaching Hospital, Ido-Ekiti) as a Consultant Physician/Cardiologist in 2008. In pursuit of an academic career, he and other vibrant young clinicians were the pioneer Consultants in the Ekiti State University Teaching Hospital, Ado-Ekiti in late 2008. He held various administrative and programme positions at EKSUTH including the headship of the Department of Medicine. Kunle Ajayi is a Faculty Member at the College of Medicine, Ekiti State University, Ado-Ekiti where he rose to become a Professor of Medicine in 2018. He was also appointed a Professor of Medicine by Afe Babalola University, Ado-Ekiti in 2018; an Associate University to the Federal Teaching Hospital, Ido Ekiti, where he is currently on national assignment.

In his unquenchable quest for excellence and professionalism in his field, Professor Ajayi was awarded the Fellowship of the American College of Physicians (FACP) in the year 2015. Willing to explore other domains of knowledge, Prof. Ajayi bagged a Master’s degree in Business Administration (MBA) from Ekiti State University, Ado-Ekiti (EKSU) in 2017. He also got a certificate in Leadership and Management in Health from University of Washington in 2018. He is an alumnus of Harvard Medical School where he trained as a clinical researcher.

This outstanding physician was a personal physician to the then Executive Governor of Ekiti State, Engineer Olusegun Oni between March 2010 and October 2010. He was also a visiting Locum Consultant to Shell Petroleum Development Company, Port-Harcourt between year 2011 and 2015 as well as a visiting Consultant to Chevron Hospital, Warri from 2014 till the time he was appointed as the Chief Medical Director of the Federal Teaching Hospital, Ido-Ekiti by the President of the Federal Republic of Nigeria, Muhammadu Buhari (GCFR), following a competitive selection process overseen by the Federal Ministry of Health.

In demonstration of his academic prowess, Prof. Adekunle Ajayi has written and published several scientific articles in many local and international peer-reviewed academic journals in the field of Medicine.

This clinician has a vision of leading a world class hospital that is dedicated to affordable, accessible, quality and comprehensive health care service delivery in a respectful and peaceful environment. This university teacher and seasoned administrator has pursued this vision since he assumed office as the Chief Medical Director of the Federal Teaching Hospital, Ido-Ekiti. His wish is to be remembered as a man who led the repositioning and transformation of the Federal Teaching Hospital, Ido Ekiti, as one of the leading tertiary hospitals in Nigeria.